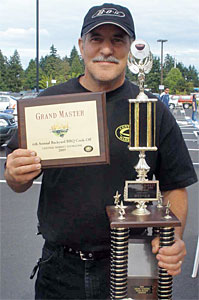 Using The Rib-O-Lator  my son Ryan and I took first place in three categories giving us the “Grand Master” win!

I’m convinced that no matter what your level of bbq’ing experience is, The Rib-O-Lator will make you “Master of your Grill” every time!

At another competition, my son Ryan and I took Grand champion at the August 2012 BBQ competition in Whitefish, MT.

For the brisket we used Butcher’s Beef Injection along with Smoky Okie’s Deep Beef Flavor, then seasoned with Plow Boys Bovine Bold, then glazed with Blues Hog. Great combination!

For the pork butt we injected with Smoky Okie’s Pure Pork Power and seasoned with Secret Squirrel (my son’s seasoning) and Blues Hog Original mixed with their Tennessee Red.

We did the ribs and chicken on The Rib-O-Lator. We used Secret Squirrel on the chicken and Blues Hog Original mixed with their Tennessee Red.

Time got away from us, so by the time we got the chicken ready to cook we only had about 35 minutes before turn in, so we cranked up the kettle to 500ºF and put it on The Rib-O-Lator and it was done in 30! The skin had a golden color and it was as bite-through as you would ever want. We glazed with Blues Hog Original mixed with their Tennessee Red.

The Rib-O-lator saved us on the chicken… there is no way we could have pulled this off on the grill at that high a temperature because the outside would’ve been burnt to a crisp. We seasoned the ribs with a sweet rub and glazed with Blues Hog.